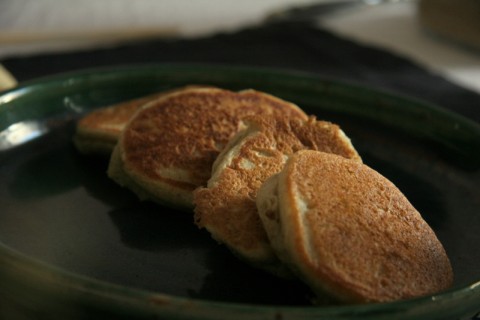 These pancakes are shockingly simple and have a phenomenally satisfying, fluffy texture. I have a hard time believing they are whole grain, let alone gluten and dairy-free. For the best results, use light (it should not be dark brown) buckwheat flour. We grind our buckwheat flour fresh and take care to fold in the egg whites very gently. This batter can also be used to make tasty buckwheat waffles.

Misleadingly named, buckwheat is neither related to wheat nor is it a true grain. Closely related to rhubarb, this pyramidal shaped gluten-free seed  is making a comeback in American cuisine, especially on the gluten-free menu. Whole buckwheat seeds, called groats, can be cooked like rice, porridge, or added to soups or other dishes. Buckwheat can also be sprouted, toasted and then made into kasha. Buckwheat can also be ground into flour traditionally used to make buckwheat noodles and pancakes.

The night before (or at least 12 hours ahead), combine the flour, water and vinegar in a large glass or ceramic bowl. Whisk until very smooth. Scrape down splattered batter from the sides and smooth surface with a rubber spatula. Cover the bowl with a tea towel and set in a warm place.

3. Mix dry and liquid ingredients
Stir the batter and then whisk in the salt, baking powder, egg yolks and oil. Mix until the batter is smooth and uniform.

4. Fold in egg whites
Gently fold in the egg whites int the batter with a rubber spatula. Take care not to loose the loft by over-mixing.

5. Cook the pancakes
Oil cooking surface with coconut oil, lard or other sturdy cooking oil. Spoon around 1/4 cup batter onto griddle to make each pancake. 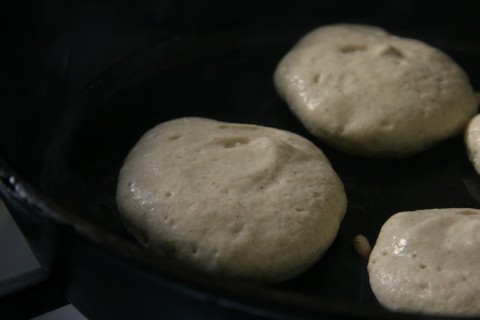 Flip when bubbles begin to form and rupture and the first side is golden brown. 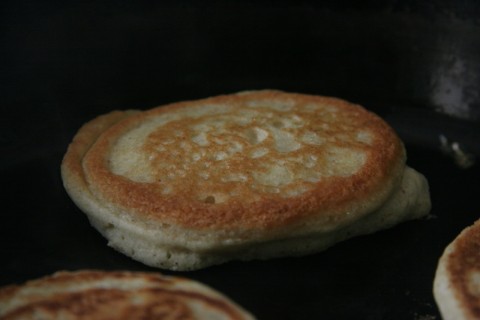 Cook the second side until golden. Re-oil the griddle before each new batch is added. 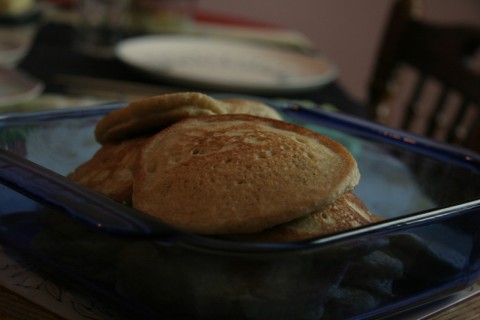 Stack cakes in an oven safe dish and place in a warm oven until all the pancakes are made.

Serve immediately, plain or with toppings.

Other uses:
Leftovers can be cooled completely on a wire rack (to prevent sweating) and stored in an airtight container on the counter for several days or in the freezer for months. They can be used as gluten free hamburger buns or sandwich bread.